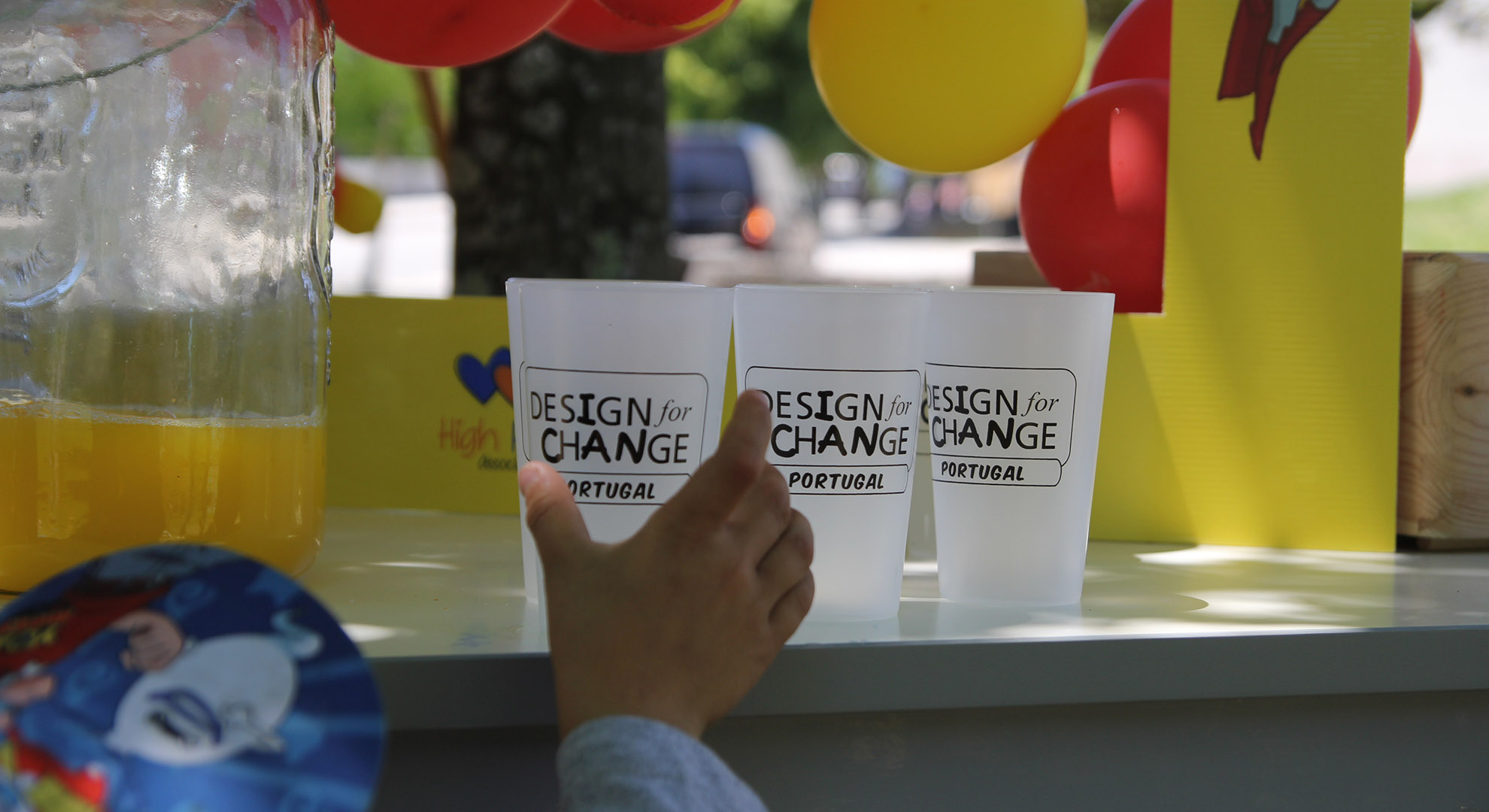 Schools and the world have undergone rapid change. Today, schools are a learning community and a community where change takes shape and happens. It’s no wonder then that many sustainability and environmental projects come from and are developed in the school environment. Children today are active agents of change. Take Greta Thunberg, for example, who is fighting the climate crisis that threatens the future of our planet. As the saying goes, “As the twig is bent, so grows the tree.”

In 2009 Kiran Bir Sethi created the DFC (Design for Change) programme in India, which is invested in changing schools and based on the idea that little heroes can effect change in the world. By joining this movement, we have helped teachers, children and young people in Portugal become a part of a global movement for change, introduced in over 70 countries. A movement in which every child, with support from their teachers, is empowered to transform the world around them, cultivating an “I CAN” mindset.

Every child says “I CAN”

The “I CAN” mindset equips every child to be aware of the world around them and to be enabled with the skills to take action and empowered to design a more desirable and sustainable future—TODAY! Change projects implemented by children across the globe have focused primarily on the environment (22%), education (17%), health and well-being (11%), water (6%), social issues (8%) and on cleaning up the planet (11%). Since 2009, the majority of participants, on average, are 13-year-old students, and it is worth noting the equal gender participation of children and young people since the initiative began.

These projects, usually, come from schools and youth communities, where adults are not in charge of the projects, but rather the children lead the projects they create after identifying a problem in which they’d like to intervene. These projects mostly address the pillars and concerns that underlie the Sustainable Development Goals defined by the United Nations, including eradicating extreme poverty and hunger; promoting quality health, education and gender equality as well as peace, justice and effective institutions; environmental action; and reducing inequalities; among other issues.

The DFC conducts continuous studies to reaffirm the impact of its approach in the design and implementation of projects promoted by little heroes. The FIDS approach is based on four simple and easily replicated steps: Feel, Imagine, Do and Share. The DFC, together with The Good Project, a research initiative under Project Zero at the Harvard Graduate School of Education, conducts research studies to study the impact of DFC on the development of children.

According to their research, more than 90% of the children and young people who participate in the DFC initiative show greater empathy. More than 80% state that they have developed collaboration skills, and more than 70% say that the programme helped them acquire leadership, communication and public speaking skills, and positive attitudes (enthusiasm, motivation, pride and hope).

Teachers also note the importance of the programme because of the positive impacts on the students and their engagement in school (93%), the impact on the community (90%), and because it helps to realise the potential of students when they participate in these projects, as they are given the opportunity to see them in action outside of their comfort zone (63%).

Recent studies conducted by Harvard University in collaboration with the DFC reveal that the confidence developed through the project has also led to improved academic scores. This is because the stimuli of a DFC project exposes students to important development areas, such as empathetic thinking, problem-solving and confidence. A recent study from Stanford University, in partnership with INSEAD, analysed the effects of implementing the DFC’s design thinking curriculum and the FIDS process on children’s creativity. The results show that design thinking training not only increased confidence, it also significantly increased ideational fluency and elaboration in a divergent thinking task.

The School of the Future

As Confucius said: “I hear and I forget. I see and I remember. I do and I understand.” This is the concept behind a new school that the world is beginning to build. A school where children are not merely “consumers” of subject matter and assessed by tests. They are also active agents who get up out of their chairs to participate and collaborate in implementing actions and multiple projects with tangible and visible results in the school community and its surrounding area. The variety of contexts the students come into contact with doesn’t only centre around the teaching of mathematics, Portuguese, languages, science and geography. They also work on behaviours and attitudes, along with the responsible concerns about the planet and society. Together, they are all part of the mission of any school-going child.

It concerns the holistic development of children and young people, which requires a paradigm shift in schools as we know them. These are the signs that have been pointing to new trends in education and tested practices, with positive results in many countries and schools worldwide.

A very practical approach that requires teachers, facilitators and educators to have complementary skills to those they already have, and which go far beyond teaching subjects in the classroom. This approach requires more leadership and the ability to build a relationship with students, more creativity, and the courage to adapt traditional classroom areas. It also fosters group work and makes it exciting, and promotes problem analysis and solving processes using the appropriate tools or through project management, including new digital tools and social media.