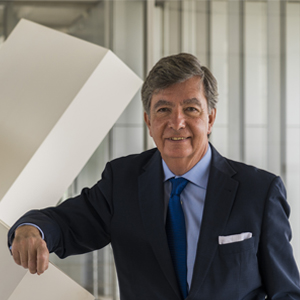 Carlos Lamela is an architect with degrees from the ETSAM in Madrid and the UIA in Florence. He is currently the chief executive of Estudio Lamela, firm founded by his father Antonio Lamela 65 years ago, with offices in Poland, Mexico and the Netherlands and headquarters in Madrid. Estudio Lamela has developed nearly 2,000 projects in 32 countries ranging from airports, stadiums, offices and housing. He has received more than 30 national and international awards in the last few years and his projects have been published in mainstream and specialized media. Some of the buildings that define his work and career are Terminal T-4 at the Madrid-Barajas Airport (along with Richard Rogers) and the Santiago Bernabeu Stadium.