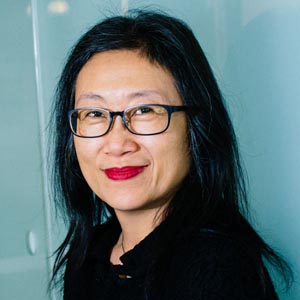 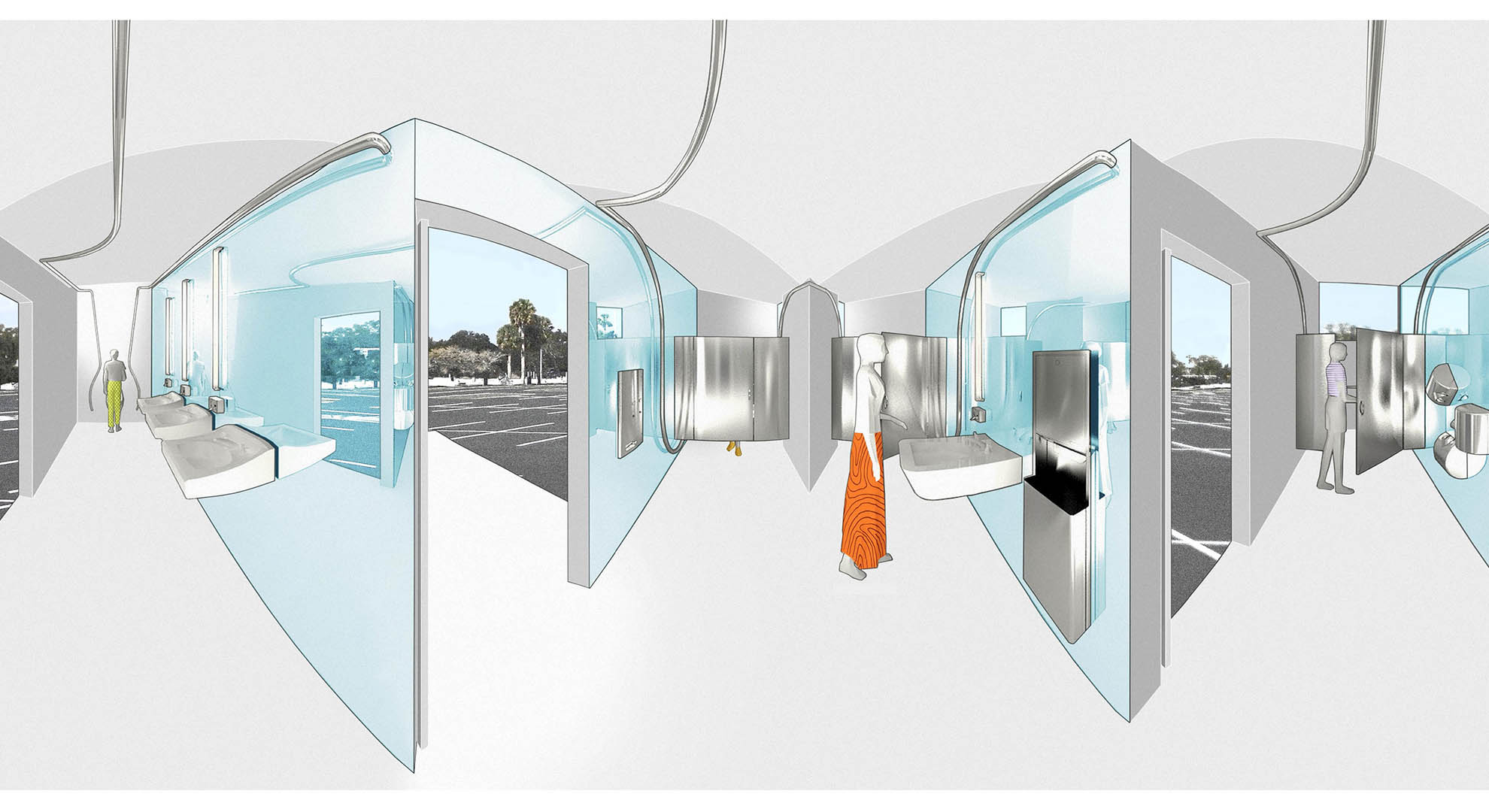 Imagine the school bathroom as a teaching opportunity where students are introduced to circular systems, biological and chemical processes and the societal standards embodied by building codes and laws that support accessibility and equity. On the one hand, utility, privacy, safety, hygienic comfort and dignity; on the other, exposure to dynamic data narratives related to global population data and intersections between water/sanitation, gender equality, education and good health/well-being. Exposing the code that underlies quality-of-life drivers can empower the next generation of advocacy for accessibility, civil rights and inclusive design. Experiential learning might include the turning radius of a wheelchair, how the soap dispenser or water faucet activates depending on skin hue’s light absorption qualities, revealing water as a precious resource and offering free period product samples.

The concept of the environment as teacher is at the core of Reggio Emilia, a humanistic pedagogical approach to early education that views “children as human beings, possess[ing] a hundred languages: a hundred ways of thinking, expressing, understanding, of encountering otherness through a way of thinking that weaves together and does not separate the various dimensions of experience.” Of course this does not account for adolescents, who would sooner poke fun at their peers’ expense than demonstrate inclusive leadership.

According to UNICEF, globally, one in three schools do not have adequate toilets, and 23% of schools have no toilets at all. UN General Assembly Resolution 70/169 states that the right to sanitation entitles everyone “to have physical and affordable access to sanitation, in all spheres of life, that is safe, hygienic, secure, and socially and culturally acceptable and that provides privacy and ensures dignity.”

What can we learn from the way we manage our bodily waste? And how might we reconsider how our youth, particularly teens, could learn from a different approach to toilets in schools? For many of us living in industrial nations, access to sanitation is taken for granted. We may live in countries with long-established universal building codes and laws governing safety and accessibility of public facilities, from parking spaces to public toilets. It can be sobering to realize how such codes and laws have reinforced biases and stereotypes of race and gender, health and safety. See the timeline below to explore the evolution of US public bathrooms in its legislative context.

In the US, euphemisms are everywhere. Students in most public schools beginning in fifth grade are faced with Health class, where topics of sexual and reproductive health and personal hygiene are presented, accompanied by nervous laughter and a dose of bathroom humor. “Bathroom” is a common euphemism: often pointed out with amusement by non-US friends, who use more direct terms like toilet, and reserve “bathroom” to the room with an actual bath or shower. In school settings, institutional-sounding terms like “the facilities,” washroom or lavatory evade the topic of elimination altogether. For the general public in the US, “restrooms” prevail, a concept that dates back to luxury department stores. For female students entering puberty in developed countries, personal care menstrual or period products are often still categorized as “feminine” hygiene products, a term embedded with stereotypes and assumptions about what it means to be female. For female students who lack access to toilets and period products, the consequence can mean missed schooling, especially but not only in developing countries.

Consider the crucial transition between childhood and adulthood, when one ventures into the public realm unaccompanied by a parent or caregiver and grows into personhood. Among the basic activities of daily living that healthy individuals take for granted is “toileting,” or the ability to use a toilet appropriately. There is a tension between this most private activity conducted in a public space, mediated by varying degrees of controlled access: greater exclusivity generally equates to a higher standard of safety, cleanliness and comfort. For teens, the onset of puberty increases self-consciousness related to heightened scrutiny and comparison with others, with new body awareness and need for more self-care, including questions about gender fluidity, developmental benchmarks, birth control and menstruation.

Moving from the safe haven of home to public facilities with urinals, graffiti and encounters with strangers reinforced association of public toilet use with potential risk and transgression. Teens were warned in the past about transmission of STDs or possibly impregnation via contact with live sperm on toilet seats (highly unlikely)—misinformation that continues to circulate in popular culture. Public pools were viewed as potential vehicles of contagion and bathhouses associated with homosexual decadence.

When I was growing up in Washington, DC, the transition from elementary school to what was called junior high school (now middle school) was marked not just by increased independence but also by adult concerns about the potential for delinquent influences through convening a larger, more diverse pool of students. To use the toilet a student would need to request a hall pass from a teacher. This was a hassle worth avoiding when there were added anxieties of encountering unsavory classmates taking unofficial breaks. Add to this mix the adolescent focus on personal/sexual identity. Once we became teenagers, parents would tell cautionary tales of the many temptations apparently surrounding us, from sex to cigarettes, alcohol and other drugs. The Other loomed large in their minds as our maturing bodies also signaled Otherness.

Earlier this year I encountered TOLO Architecture’s thought-provoking commentary on the debate over transgender access to public toilets. The resulting conceptual exploration reflects not a solution but an intentional response to the interplay between social norms and cultural biases as civil rights considerations require updating laws and codes governing public spaces. The title of the TOLO project references the human sex determination system whereby two X chromosomes (XX) determine a genetic female and XY, a genetic male, resulting in binary labeling.

The impetus for XYYXXY was the 2016 legislative move by the state of North Carolina to restrict access to public toilets based on birth gender as opposed to gender identity. The law, HB2, restricts transgender individuals’ public toilet use to the gender stated on their birth certificate. The consideration of gender separate from biology is addressed by feminist and queer scholars, notably Judith Butler, whose work presents a theory of gender performativity that is taught to us from infancy through societal norms and expectations. When my seven-year-old son and I were expelled from the women’s locker room at a university pool where he was taking swim lessons because of a “women only” policy, I was incredulous that gender segregation could reach an impractical extreme of interpretation.

XYYXXY presents an alternative “stage” that is described by the designers as “oscillating between the social space of architecture and the more purely aestheticized space of sculptural form.” The functional aspects of the facility (fixtures, lighting and signage) are laid out within a stylized intersection, in compliance with current building code. One of the most interesting provocations in the XYYXXY design is the communal juncture, where visitors may encounter each other, which challenges separation as the norm to address inclusion. After all, inclusion is neither easy nor comfortable, and it is important to challenge our comfort zones as we seek to dismantle literal and figural barriers to a more equitable society.

For context, this is a timeline with US legal milestones

1954: Brown v. Board of Education (desegregation of education).

1968 Architectural Barriers Act (ABA) requires certain federal and federally funded buildings and other facilities to be designed, constructed, or altered in accordance with standards that ensure accessibility to, and use by, physically handicapped people.

1990 ABA extends to all buildings, not just federally funded.

2009 Americans with Disabilities Act (ADA) prohibits discrimination against people with disabilities in several areas, including employment, transportation, public accommodations, communications and access to state and local government’ programs and services.

2016 North Carolina’s HB2 bill requires transgender people to use the toilet with the sex listed on their birth certificate and nullified local protection laws.

2021 the proposed Equality Act, passed by the House of Representatives on February 25, would provide consistent and explicit antidiscrimination protections for LGBTQ+ people in the US, across key areas of life, including employment, housing, credit, education, public spaces and services, federally funded programs, and jury service. Pending next steps include review by the Senate and the President of the US before becoming law.

Shomi Kim is jury of jumpthegap®, Roca’s International Design Contest, for which participants are invited to submit their designs between 3 May and 6 September. For more info visit: www.jumpthegap.net