With funding from UNHCR, Tateh Lehbib is building weather-resistant sustainable homes in the Sahrawi refugee camps

An End to Single use Plastics in the European Union

Ahead of the Cloud 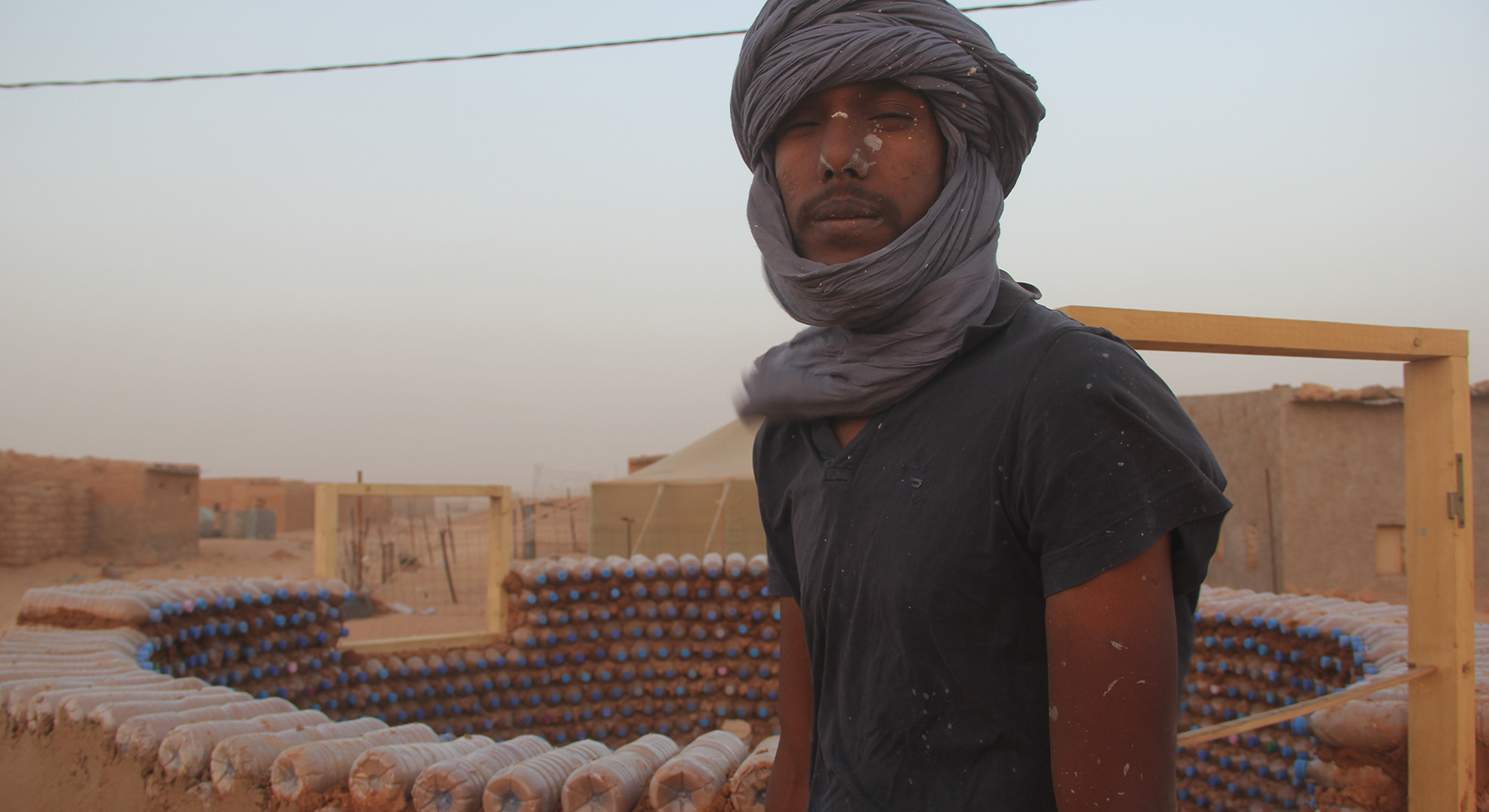 Known locally as ‘the crazy bottle guy’, engineer Tateh Lehbib constructs sturdy adobe-type homes in the Western Saharan refugee camps (pop. 90,0000) from plastic bottles and sand. His work was featured in Design for a Better World, an exhibition at Roca Gallery Barcelona.

Here he tells his story.

“I was born in the refugee camp. My parents and grandparents fled the war.  When I was growing up, there wasn’t any secondary or tertiary education in the camps. So for higher education we had to go to Northern Algeria – 2,000 kms away. It was here that I studied renewable energy. Later on I was lucky enough to get an ERASMUS grant and study energy efficiency and the Universidad de Gran Canaria.

In 2015, there was a flood in the camps. It affected about 80% of the homes and one of them was my grandmother’s.  All the homes in the camps are made of adobe – they aren’t resistant to water. This was the point when I started to think about a solution – how to alleviate the suffering of my people.

So I got in contact with my teachers and told them my masters would be about how to improve the energy efficiency of adobe houses, to make them more resistant and lower their interior temperature.

In other places in the world there are adobe houses that have lasted centuries, but the problem in the Western Sahara is that the earth has a high quotient of salt, which lowers their resistance.

So I did my masters on what is called the Nubian Vault, which is a construction technique that makes a curved surface using mud brick. The technique, which is simple and can be carried out by anyone, has been around a long time, but was rediscovered by the Egyptian architect Hassan Fathy.

After finishing my studies I went back to the camps with the mission to make my grandmother a new house that would be cooler inside and could hold up in severe weather conditions.

I started to construct using the Nubian Vault method but ran into problems, as I didn’t have much experience. I then decided to make a green roof, but the problem was I had to use metal sheets, which generate a lot of heat. I then decided to use plastic bottles; cutting them in half, putting earth and plants inside and then placing them on the roof.

That didn’t work either.

I had a lot of plastic bottles left over from the experiment. That’s where the idea came from.

I use the sand-filled bottles like bricks, held together with a mixture of earth and water, or sometimes with cement and river sand, which is stronger.  The design has a double roof with a ventilation shaft in-between, which lowers interior temperatures. We put a layer of adobe over the bottles, and a nice pattern appears, almost like art.

Most of the homes in the camp are a square shape, but I made mine a circular shape to give them more strength. Also during storms, sand accumulates around the walls of square –shaped homes. This doesn’t happen so much when they are circular.

It was difficult to get the idea accepted. Nobody believed that you could construct a home with plastic bottles. I was called ‘ the crazy bottle guy’. Also nobody wanted a home made of ‘rubbish’. And there was a lot of resistance to the circular shape; they were worried about rugs. “Where are we going to get round rugs?” they asked.

But the homes are holding up in extreme weather conditions, and interior temperatures have proved to be about 5 degrees lower. I have built 25 houses so far, across all the five camps. We prioritise older and sick people, or those who have a handicap.

The technique can be applied in different locations, not just refugee camps. Just a short time ago an organisation called me who were interested in me doing a project in the capital of Mauritania. These homes can be built wherever there is plastic waste. And wherever you go, there is no shortage of that.

But I don’t think my project is a be all and end all solution to plastic waste in the camps – and I don’t want people to think that it is. It came about via looking for a construction solution with material that was readily available; sand and plastic bottles.”