The Uncertain Future of New Orleans

A possible blueprint for redesigning the future of riverfront cities 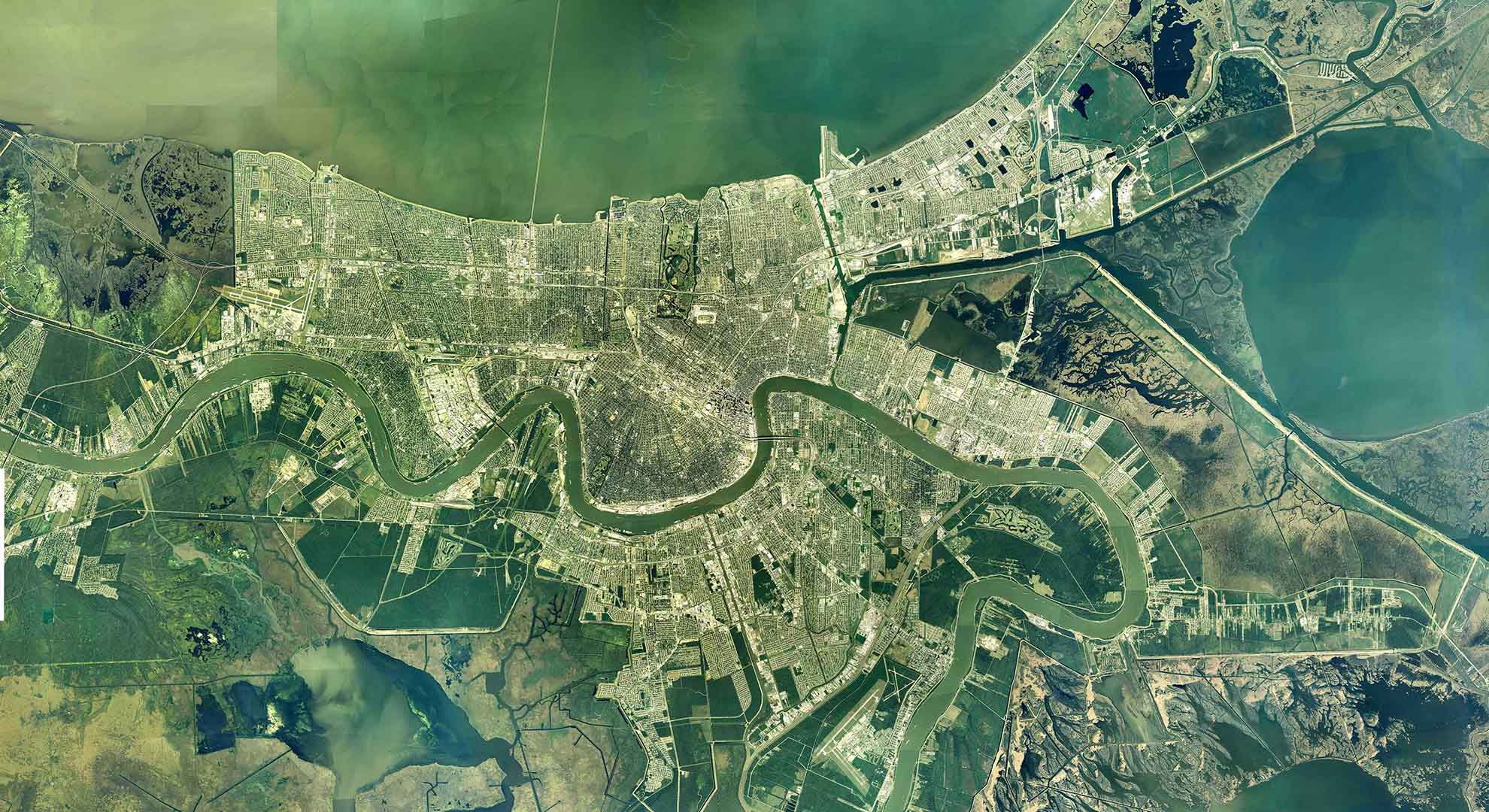 The latest projections of global warming, in multiple scientific studies and more specifically in the reports released by the International Panel for Climate Change (IPCC), show different effects in coastal areas for scenarios between 1.5 and 3 grades centigrade. Most of the “terra firme” lowlands predicted to become submerged are deltas built by rivers over the last few thousand years. Due to the fertility of these river-made territories, deltas are some of the most productive lands, responsible for feeding hundreds of millions of inhabitants of the planet. While new technologies may mitigate some of these food-production shortfalls, there are no techniques yet available or being seriously developed to save cities located in the deltas, such as the case of the Mississippi Delta.

The loss of the Ganges river mouth will reach the capital of Bangladesh, home to nearly 40 million inhabitants in its metropolitan core. Half of the Netherlands, and many of its most critical cities (with world-class infrastructures, such as the port of Rotterdam or Schiphol Airport) are under threat. Likewise, situated on the continental-scale delta of the Mississippi River, perhaps the most idiosyncratic city of the United States—New Orleans—faces an uncertain future.

The Mississippi Delta is one of the world’s largest, best examples of a river-dominated delta, with the river and its distributaries building land along the Gulf of Mexico for over 4,500 years. Contrary to other riparian morphologies in which the river collects runoff, in this alluvial delta the river forms the highest ground and distributing sediments through a system of distributaries. The main trunk of water builds a natural levee that, under natural conditions, occasionally overtops its banks or breaks seasonally flooding, nurturing and physically building new land with the sediments in its water column.

New Orleans is inextricably linked to its unusual geographic condition

Situated on the lowermost Mississippi River, New Orleans was accessed initially from the Gulf of Mexico through the brackish Lake Pontchartrain and several bayous. Although it became a premier commercial hub of the Americas in the mid-19th century, today it is far from being a major US city.

New Orleans and the Mississippi Delta are now facing extraordinary challenges. The flood mitigation systems—that is, artificial levees along the river—have stopped the distribution of sediments, which instead are lost to the ocean through the main mouth, thus accelerating land loss. The coastal erosion is aggravated by the loss of marshland, critically affected by the drainage of the territory and the oil extraction canals that introduce saline water into the ecosystem. Worse yet, sea level rise nearly doubles the relative rate of absolute subsidence, and exponentially increases the fragility of the fraying delta.

At the same time, the transportation industry continues changing. New routes and larger ships connecting the world’s logistic hubs are becoming ever more demanding of connectivity and infrastructural capacities. New Orleans’ limitations in deep water accessibility, centrality for road transportation or big-cargo aerial bases, suggests that the recovery of a leading position among American cities is unlikely for New Orleans. Assuming the decline of the oil and gas industry, either for lack of reserves or for a set of new environmental values, banks along the lower Mississippi might become obsolete as industrial assets, and therefore potentially vacant. This extraordinary change has a territorial scale. In Louisiana alone, it will affect most of the heavily populated parts of the state, namely the lower half. The shift will be even more critical in urban areas, where thousands of people reside on lower lands, in many cases below sea level. Additionally, there are pressing questions about insurance, vulnerability, diminishing job opportunities, and basic equity.

A case study for the future development of urban ports

The Tulane School of Architecture, along with the entire university, has been studying and developing proposals for New Orleans and Louisiana for many years, most urgently since Hurricane Katrina caused an unprecedented catastrophe in 2005. The challenges of small towns close to the coast, communities struggling with relocations, or social equity in the built environment of a city with staggering socioeconomic, racial and environmental inequalities are some of the focuses of the work. One of the school’s research projects, “The Future of Ports: from the Backyard to the Forefront of Ecology, Economy and Urbanity,” tackles the future development of New Orleans at the city scale.

Led by Margarita Jover, an interdisciplinary team has focused on the man-made Inner Harbor Navigation Canal, which is the second strip of high grounds on the banks of the Mississippi. The double condition of this topographic asset with the postindustrial vacancy of its banks offers the possibility of transforming an urban void and severe environmental hazard into valuable territory with regard to sea level rise. The change of the orientation of the city and the evolution of its footprint is not only a question of socioeconomic and environmental advantages. Many cities around the globe have confronted this transformation, but have not been prompted by such environmental urgency, nor introduced this factor in the design of river or coastal fronts.

In New Orleans, identifying and effectively using the most adequate and safest areas for human inhabitation while reformulating the relation of the city with the ecological systems of the delta, may prove to be the base of a series of new principles guiding the future of one of the world’s most delicate and fascinating cities, and a worldwide paradigm for multiple others facing similar challenges.